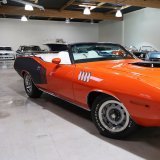 An update on Earl, he is home! He got home yesterday and is recovering. I received a text stating his thanks and the text sounded upbeat. Keep praying, he still has a tough recovery, but it's looking

ALL GOOD THINGS MUST COME TO AN END! (Or so they say!)I am officially back to work at my "Day Job" starting Monday, March 15th, 2021! All of my kits I offer, as well as the Shim Kit Loan are being off

First off, I wanted to thank each and everyone for your prayers and well wishes for both Jean and myself. I can't tell you how much it meant to us, especially right after the surgery when it was touch